By means of photographs you are bringing the life of Mahatma Gandhi to the masses for which you deserve congratulations! Excellent collection! Excellent publication!

A pleasure to hold and savour, this classic photo biography—with an illuminating Introduction and background information—brings alive Gandhi’s incredible life and strivings as well as his congenital and carefully cultivated greatness. A treasure trove for the present generation and posterity!

The publication MAHATMA – Gandhi’s Life in Colour by GandhiServe India is a historic and the first of its kind collector's volume.

What distinguishes the publication is the wealth of narration and the authenticity that has been maintained.

Both for libraries and researchers across the world this is a priceless possession.

What a weighty book – and in many ways!
The mixture of photographs, cartoons, newspaper excerpts, selected letters and map material makes the publication a jewel of Gandhi documentation in the 21st century!


Both the targeted selection of texts as well as the loving systematization and the chronological classification of the images are based on the passion of its authors, who have done meticulous and interdisciplinary work for over three decades.


The book is also scientifically an important treasure trove of the central historical stations of Mohandas K. Gandhi, who himself never wanted to be an icon; and by his exemplary and selfless action became precisely this icon.


The book claims, despite its proud price, a place in as much as every library in the world, in as many public places as possible and as present as possible in every household in which people want to learn from Gandhi’s exemplary life in images and texts; so that it can be opened on a daily basis in order to get new motivations for the implementation of a sustainable and just world.

Today, there is no other alternative but to adopt and follow Gandhi's philosophy based on truth and nonviolence.

This monumental book is a symbol of it.

This book is without exaggeration, a treasure.

In this age when pictures speak louder than words it is a priceless immersion that will help experts and newcomers alike come into the presence of the greatest person of the Twentieth Century.

THANK YOU! Your magnificent book arrived today! What a treasure. It is beautiful, insightful, and the selections of Gandhi's writings and writings about Gandhi are deepening and will continue to deepen my understanding of this remarkable person and the broader movement.

There is something about the color photos that brings this history alive in ways that the black and white photos (and the Gandhi movie) never managed to do. I am reading it, savoring it, and feel both inspired and a bit intimidated by the "weight" of this legacy that we all must pick up in our own lives.

Deep bows to you. I am grateful for all that you do.

I am mesmerized by the sheer scale of production, nearly 700 pages, all in beautiful life like colour, in a large generous A/3 size of about 11 inches x 16 inches. Excellent printing and hard bound perfectly.

It shows the years of hard work and pains taking research that must have gone into a book of this magnitude. While Mahatma Gandhi worked tirelessly to free India, you have given life to the whole freedom movement.

This is a must have book for all libraries all over the world. Congratulations.

The more I go through the book the more it comes home to me, how monumental a work it is.

The colour also grows on one and adds a lot of interesting detail to the pictures. Something no one has ever seen before in this way.

Truly a unique and inspiring book!

As supporter of the exhibition “Mahatma Gandhi’s Life in Colour” by GandhiServe India during the International Sarvodaya Conference at New Delhi in 2015 I’m proud and grateful to hold all the magnificent and inspiring pictures bundled in my hands.

This is not a book.

This is a monument on paper; the biggest, heaviest, most radiant thing ever printed on the outstanding life and work of the Father of the Nation, Mahatma Gandhi.

This is a great piece of work, capturing the life and work of a great man.

It is scholarly, well-researched and put together like a great work of art.

It is a treasure for all of us who were not fortunate enough to be born during his life time.

We salute you all, along with the Mahatma.

He continues to inspire. Thanks for putting this together.

I thought the book was truly amazing!

Each time I read this book it almost felt as if I was visiting a museum with rare artifacts and insight, all without leaving my house.

I can definitely tell that making it was a labor of love as the care that was taken in putting it together shined throughout the pages.

I found myself very inspired, not only by the life of MK Gandhi but also the effort that went into creating such a book.

This superbook indeed weighs 6.5 kilos, ... But its contents are remarkable: a rather complete chrome reproduction of the important photographs of Gandhi, not a selection.

Such visual completeness has only few times been on the market. …

There are also quite a few specialized articles which make this compilation a reference book on topics such as spinning, Gandhi’s letter to Hitler, Swadeshi, etc.

The great book MAHATMA is your great creation for which I salute you.

The book successfully takes the reader into great Gandhi era and motivates to review his worldview.

I am trying to propagate this great book.

I am so deeply grateful and honored to be holding such a piece of work. The most beautiful book I could be witnessing ... breathtaking ... such beauty. It is an indescribable feeling to gaze upon historic black and white well-known images of Bapuji, his family and community in color. The timeline format is extremely useful in understanding Gandhiji's evolution into one of the all-time greatest social political leaders who has ever lived.

The book arrived in good order. Thanks very much for wrapping the book in plastic, as the delivery man left the package out in the rain, and the box was drenched. The book would have been damaged had it not been wrapped in plastic.

Its a monumental work on Gandhiji, much better than every other effort in this direction done so far. Congratulations!

Remarkable! On over 690 pages, it is possible to follow – by photographs, documents and newspapers of the time, letters and manuscripts – the most significant and emblematic moments in the life of the visionary Mahatma.

The treatment given to the photographs makes them relevant and incredibly contemporaneous, bringing the reader closer to scenes distant in time, but preserving the gift of touching and renewing the admiration for this man who even now makes history, inspiring, in the four corners of the world, millions of movements aiming at social changes and nonviolent politics.

This book will stand out as one of the most seminal and unique contribution by way of resurrecting Gandhi in life-like images, if not in blood and bones, to the benefit of the humanity.

Generations to come will refer to this book in order to get a realistic picture of the Apostle of Nonviolence!

The colourful journey of a legend for humankind radiates out of this book like never before and will inspire many to do more for a better world.

I thank you for the excellent coffee table book on the life & message of Gandhi ji.

I think this is the best work done on this planet on Gandhi ji to restore his memories, life & message in such a wonderful way !!

It is not only a collector's delight but also a symbol of the great legacy of Indian soil which produced such immortal personalities who had shown the way of life to the people across borders. 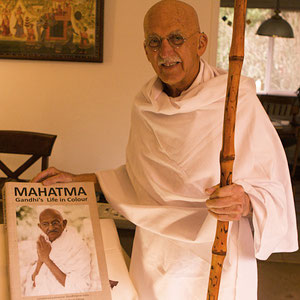 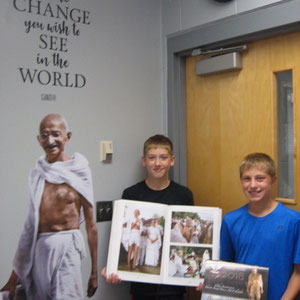 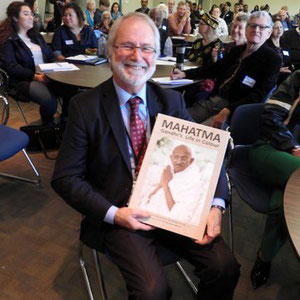 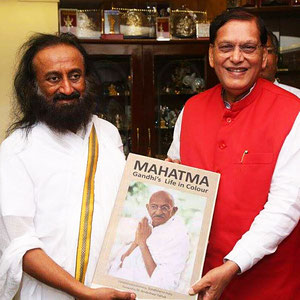 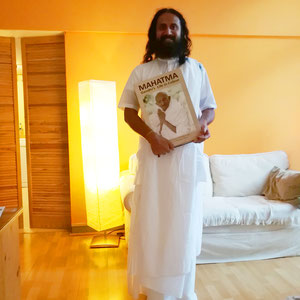 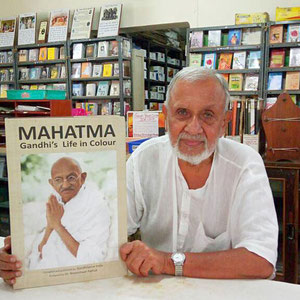 Send us your photo holding the book along with your opinion about the book and we will publish it here and on our Facebook page.